“[In his State of the State address, Cuomo] announced on Tuesday a statewide program of indoor and outdoor shows over the coming months that will feature upwards of 150 performers — among them Hugh Jackman, Wynton Marsalis, Renée Fleming, Amy Schumer and Chris Rock. The public-private partnership, which Cuomo called the ‘New York Arts Revival,’ commences next month and is the most ambitious attempt yet by any state to promote and advance a return to live performances.” – The Washington Post 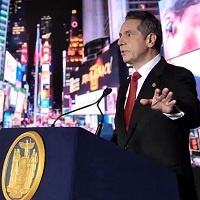