“The ancient city of Palmyra in Syria, which was severely damaged by ISIS militants in 2015, appears to be heading toward reconstruction. In November, a memorandum of understanding on rebuilding the city’s Triumphal Arch was signed between Syria’s Directorate-General of Antiquities and Museums and Russia’s Stone Industry Association, which is based in Yekaterinburg.” – The Art Newspaper 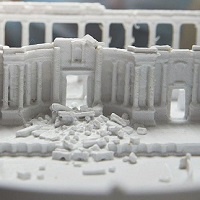