Britain’s musicians are anxious and angry about the fact that they’ll now have to get temporary work visas from every EU country they want to perform in, which will make touring the Continent difficult and expensive. Prime Minister Boris Johnson has claimed that EU negotiators gave him no choice in this. Now sources in Brussels say that, in fact, Johnson’s team turned down an offer to let British performers tour visa-free for up to 90 days because they didn’t want to make a reciprocal deal for European performers touring Britain. – The Independent (UK) 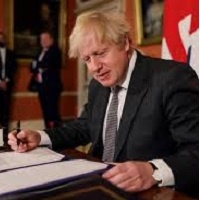