When the ever-provocative protest artist put online sexual images and messages sent to a woman by former Macron aide Benjamin Griveaux, thus driving him from the race for mayor of Paris, Pavlensky was violating France’s revenge-porn law, which carries penalties of up to two years in prison and a €60,000 fine. Pavlensky, who is in France on political asylum from his native Russia, and his girlfriend (the alleged recipient of Griveaux’s sexts) are being held by police. – Deutsche Welle 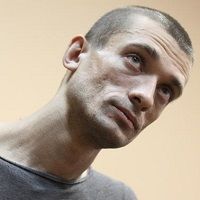