Pyotr Pavlensky — who gained notoriety in Russia for sewing his lips shut in solidarity with Pussy Riot and nailing his scrotum to Red Square, and who, having received political asylum from the French government, proceeded to set fire to the Bank of France — obtained, posted online, and gave to the newspaper Libération sexting messages and images sent to a woman by President Macron’s former spokesman, who is — make that was — running for mayor of Paris. – Yahoo! (AP) 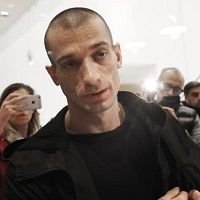