Controversy has raged over the awarding of this year’s Nobel Prize for Literature to the Austrian writer, acknowledged as an accomplished author but accused by many observers of denying or defending Serbian war crimes in Bosnia in the 1990s. So John Erik Riley decided to reread the Handke essays at the heart of the dispute and visit Sarajevo, Goražde, Višegrad, and the site of the massacre at Srebrenica. – Literary Hub 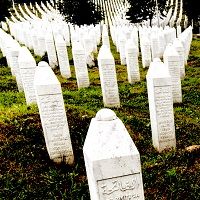