“Author Kristoffer Leandoer said he was leaving because he had ‘neither the patience nor the time’ to wait for the committee to complete its reforms” called for after the scandal that led to the postponement of last year’s award to this year. He said that his resignation had nothing to do with the very controversial choice for this year’s prize of Peter Handke, but the other departing member, Gun-Britt Sundström, said her decision was for just that reason. – Reuters 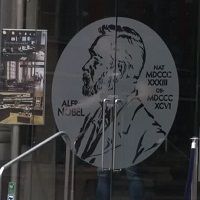