The playwright and director René Pollesch will take the reins at one of Germany’s most important theaters in 2021. He succeeds Chris Dercon, formerly the director of London’s Tate Modern art gallery, who lasted only six months in the job in the face of regular protests over his presence there. “Those included personal attacks — feces were left in front of Mr. Dercon’s office at one point — and an occupation of the theater by left-wing activists.” – The New York Times 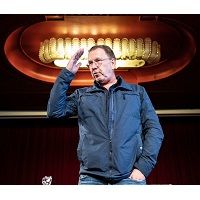