“Protesters associated with [a group called] Dust to Glitter had been occupying the [Volksbühne] since Friday night, declaring the building ‘property of the people’ in their initial statement. They intended to develop a ‘People’s Stage’ over the next three months, as well as an ‘anti-gentrification center’ and a ‘parliament of the homeless.'” (The protests were not aimed specifically at controversial new artistic director Chris Dercon.) Yet the occupiers left peacefully when the police arrived (though a few had to be carried away) – as one of the organizers said, “It seems that the theater workers were not entirely supportive of the occupation.” 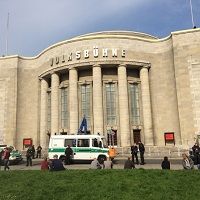