How do you know what an audience is really thinking? Polite applause only tells you so much. Lagging ticket sales aren’t precise about cause. Focus groups aren’t reliable. So then there’s this story about millennials’ reaction to an O’Neill play they were attending:

About two scenes into the play, the students began to grumble among themselves. It was clear they felt they didn’t relate to the story. They were bored, and they resented being forced to attend a three-hour play. But instead of leaving the theatre and taking a zero for the assignment, which might have constituted a kind of nonviolent protest, they began speaking and laughing with each other. Some were asked to leave, but those who remained continued to interrupt the performance with chatter and flash selfies, videos, and a laser pointer. One performer was hit in the eye with the beam.

While that audience’s behavior was unacceptable, I wonder whether we might learn something from it. In some ways, the unadulterated responses of those disgruntled, unengaged students may be a gift. As theatremakers and educators, we have an immense responsibility to deal with this demographic in particular, for they are the next generation of audiences who will—or will not—attend shows created by the next generation of theatre artists.

We might see that disrupted O’Neill performance as a call to reexamine the invitation we extend to student audiences—to question our programming choices as well as our motivations for assigning performances to students in the first place. In short, it can be an opportunity to ask ourselves: What do we gain, and what do we lose, when we invite the next generation of theatregoers into our theatres?

But it’s not just student audiences. How are artists to understand the impact of and engagement with their work if audiences aren’t honest in their responses? Even if those responses aren’t polite. Which is not to say that artists should have to accept laser pointers and selfies. But a decision to write off such behavior and such audiences is a choice to define the conditions and context in which our work needs to be seen. Which is fine. As long as we’re clear about what they are. 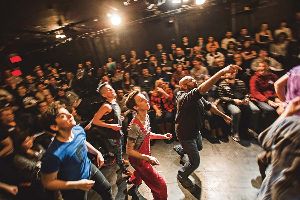