There was a time when to be elite meant to be something special – to be “chosen” or “select”. The OED says the English noun is “The choice part or flower (of society, or of any body or class of persons)”. But 2016 has not been a good one for elites, and the term has become a junk condemnation – “people with unearned privileges who keep honest folks from getting a fair shake.”

America has always had a distrust of experts, and in recent elections those who are expert or elite have been blamed for anything that hasn’t worked when it should. Politically this has been an effective tactic, but it also speaks to other sectors of our culture. Critics are elites who aren’t in touch with common opinion. “High” art is elitist because it holds itself out as better than popular culture.

Elites are suspect because they suggest complexity, nuance and ambiguity in a reactive age that demands simple answers.

Populist anger is hardly surprising: elite financiers tanked the global economy, elite economists failed to foresee it and political elites failed to respond effectively enough. Those elites in the crosshairs had to find other elites to blame, and they did so. Elite scientists and Hollywood liberals whining about climate change cost coal miners their jobs. Elite London journalists noshing on sushi ignore the problems that hard-working northern Brits suffer as a result of immigration. Cultural elites police what can be said about minorities. And so on. But the rush to blame elites has nearly everyone in the crosshairs

The populist uprising against elites threatens also to be a war on excellence, on achievement, on accomplishment. As we increasingly define quality using algorithms that really measure popularity, the meaning of elite as special or choice are in danger of being marginalized. 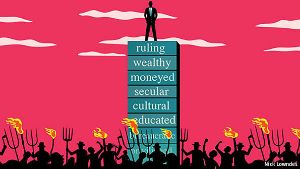