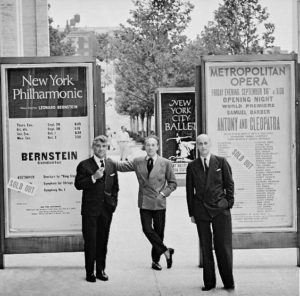 Fifty years ago an instantly iconic photograph was taken of Rudolf Bing, general manager of the Metropolitan Opera, Leonard Bernstein, music director of the New York Philharmonic, and George Balanchine, artistic director of New York City Ballet. They are posed in front of Lincoln Center’s Philharmonic Hall. The Met is about to inaugurate its new home, completing the move to … END_OF_DOCUMENT_TOKEN_TO_BE_REPLACED

We’d like to consider Lincoln Center the idea, in the bigger American cultural context. Joseph Horowitz, as a fellow at NYU’s Center for Ballet and the Arts has written an essay that suggests that Lincoln Center, which re-situated the New York Philharmonic, The Metropolitan Opera, and New York City Ballet with the aim of becoming a launching pad for a new era of America’s performing arts, instead represents a kind of cul de sac, and that artistic leadership in America has struggled ever since. We publish his essay here along with five responses to his provocation.

With the arrival of the Metropolitan Opera at Lincoln Center fifty years ago, the three main institutional constituents were put in place. New synergies were expected to ignite higher achievements at the Met in tandem with the New York Philharmonic and New York City Ballet. In retrospect, it is unsurprising that this never happened. The twenty-first century poses exigent challenges to performing arts institutions – challenges that may be more readily met where “bigger is better” assumptions were never implemented.

Is artistic leadership at America’s arts institutions lacking? Is this at the root of declining relevancy?
- By Diane Ragsdale
Perhaps now is the time to prioritize artistic vision over business acumen; to grant artists primacy within the arts institution; and to shift attention from wealthy donors to the community-at-large. Perhaps now is the time to embrace the paradox of being Public Arts Institutions: a part of society—but a part which must remain apart in order to fulfill its role.

Artistic Leadership Is About Vision And People, Not Buildings
- By Thomas W. Morris
We live in an era of growing niche audiences for music – institutions cannot address that reality if frozen in fancy yet over-large and rigid concert halls that trap them artistically, financially and organizationally... Could it be that doing less but better is a more promising strategy?

Is The Institutionalization Of Our Arts A Dead End?
- By Douglas McLennan
While there is an argument to be made for clustering together arts organizations and cultural buildings, the idea has to be animated in some way. Why should these organizations physically be together? Is it about art or about buildings? If it's about buildings - creating a kind of critical mass of cultural activity that benefits by proximity - then the art comes to be defined by the buildings and how they're used.

An Experiment for American Dance?
- By Deborah Jowitt
And that was that for the American Dance Theater: a valiant, unsustainable effort to identify the New York State Theater as welcoming to other New York City companies beside New York City Ballet (and possibly to introduce modern dance to a larger audience). The idea of a repertory company that would present the works of various contemporary choreographers in a theater in which none of them could afford to perform with their own companies (or could have filled) was admirable. It was also unworkable. For whatever reason, shared seasons materialize either.

A Museum Culture of Symphony Orchestras?
- By David Gier
We have indeed created a museum culture out of this art form, one which is perceived as irrelevant for many reasons, an unnecessary result of a focus on the “masterpieces” we all know and love at the expense of the creation of our own voice.