“The Nigerian playwright and poet, who became the first African to win the Nobel prize for literature in 1986, published his widely celebrated debut novel, The Interpreters, in 1965. His second and most recent novel, Season of Anomy, was released in 1973. Chronicles of the Happiest People on Earth, which will be published in Nigeria before the end of the year [and internationally in 2021], will be his third.” – The Guardian 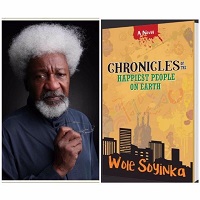