“Objects including Egyptian sarcophagi, stone sculptures and 19th-century paintings held at the Pergamon Museum, the Alte Nationalgalerie and the Neues Museum sustained visible damage during the attack on 3 October. … German media have linked the museum island attack to conspiracy theories pushed through social media channels. … One such theory claims that the Pergamon Museum is the centre of the ‘global satanism scene’.” – The Guardian 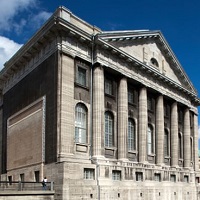