No, it wasn’t to generate random patterns of movement; rather the contrary, in fact. Ellen Jacobs, for years his company’s publicist, recounts how, at age 70, when his body could no longer demonstrate to his dancers everything he wanted, he began using a software program called LifeForms: “He carefully moved the limbs of these avatars — he called them Michelin men — joint by joint, in multiple directions, and wondrous new possibilities appeared.” – The New York Times 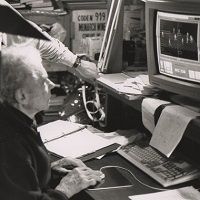