Fortunately, she meticulously documented them, too. “Over the years, thousands of hours of rehearsal footage accumulated in Brown’s archive, most of which make up 1,200 videotapes known as the Building Tapes. … After an extensive search for the right home, the company is placing its founder’s archive — including the Building Tapes and corresponding notebooks, known as the Building Notebooks — at the … New York Public Library for the Performing Arts.” Siobhan Burke takes a look at what’s in there. – The New York Times 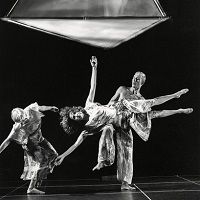