“Before Martha Stewart and Marie Kondo were giving advice on household design, before Julia Child was teaching the art of French cooking on television, there was Terence Conran. … He took his ideas around the world and once owned an empire of 90 stores with annual revenue of more than $2 billion. Calling himself a ‘hard-working hedonist,’ he opened more than 50 restaurants, wrote more than 40 books, ran a design studio and later an architecture and urban planning firm. All of it was built on the simple idea that good design leads to better living.” – The Washington Post 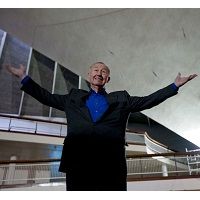