Mr. Crouch was an actor, playwright, jazz drummer and college professor — without benefit of a college degree — before he emerged in the late 1970s as one of the country’s most original, contentious and (sometimes literally) combative writers. He was a bare-knuckled literary provocateur — erudite and fearless (some would say reckless) — while reveling in his often truculent takedowns, often of works by other African American artists and intellectuals. – Washington Post 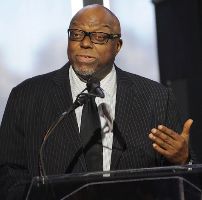