The port of Beirut explosion left close to 200 dead, thousands injured and more than 300,000 people homeless, but it also attacked the very heart of the cultural community of the city. The quarters most affected—Gemmayze, Mar Mikhael and Ashrafiyyeh—had previously been spared much of the full-scale destruction of the Lebanon’s long civil war between 1975 and 1990. – The Art Newspaper 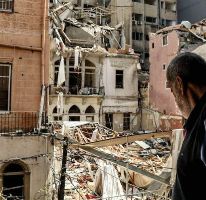