Such viewing from afar, once rare in concert dance, has become ordinary. But where most such performances these days are free and prerecorded, this one was ticketed and livestreamed. If you missed the show, you couldn’t catch it later, so it had immediacy. But, unlike most livestreams, this was not a static recording or a glitchy presentation over Zoom. Watching it felt more like watching a movie, immersive and absorbing, yet easily the most technically sophisticated live dance production I’ve seen since theaters closed. – The New York Times 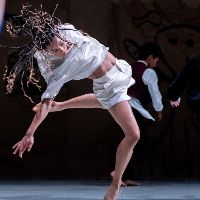