A little over a year into my tenure at The Chronicle, I’d been initiated. For journalists, receiving an angry handwritten letter about usage from Quentin Kopp is a rite of passage, badge of honor and battle scar… His second letter to me, from December 2018, protested my use of “spaz” as a verb and any use whatsoever of “grok,” which he called “self-devised.” He concluded with a backhanded compliment: “But, don’t worry: Some quasi-literates may embrace you because you’re creative.” – San Francisco Chronicle 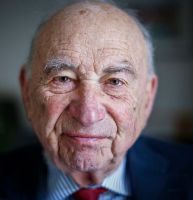