In 2011, Hallberg joined the Bolshoi Ballet as a principal, the first American (and one of the few foreigners) ever to do so. In 2019, he danced what would turn out to be his final performances there, and perhaps anywhere. A New York Times photographer followed him over his last months at the Moscow theater, and here he talks with Roslyn Sulcas about some of the photos. – The New York Times 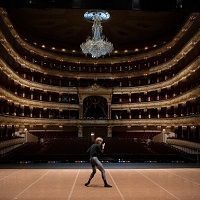