Among the artists whose works he bought, exhibited, and donated to museums (and to some of whom he paid regular stipends) were Thornton Dial Sr., Lonnie Holley, Bessie Harvey, Mose Tolliver, and the quilters of Gee’s Bend, Alabama — and he would compare their art to that of Rauschenberg, Johns and de Kooning. His efforts did not go without criticism, though, including accusations of white paternalism and enthusiasm to the point of pushiness. – The New York Times 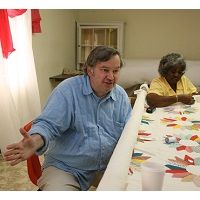