Its roots go back to the Pickford-Fairbanks Studios, established in 1919 on a corner of Formosa Avenue and Santa Monica Boulevard in West Hollywood. Renamed United Artists Studio in the 1920s, the Lot, as it came to be known, eventually became the site of Samuel Goldwyn Studios. In 1961, Lillian Michelson, wife of renowned storyboard artist Howard Michelson, became a volunteer there, and eight years later, she made the library her own. – Los Angeles Times 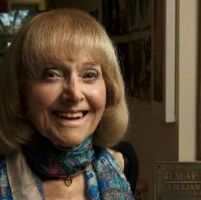