The Byzantine emperor built it in the sixth century to be the flagship cathedral of Eastern (and perhaps all) Christianity. When the Ottoman sultan conquered Constantinople in 1453, he converted it into a landmark mosque. When Atatürk’s secular revolutionaries founded the modern Turkish republic, he made it a public museum honoring both faiths and their histories. But next week, a Turkish court will rule on whether President Erdoğan can make good on his longtime campaign promise to (as his justice minister puts it) “see its chains broken and opened for a prayer.” – Public Radio International 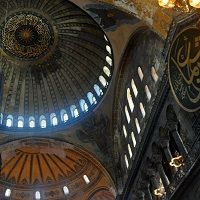