So far, at least, this isn’t as bad as many people had feared. A presidential spokesman, talking about plans to turn the historic Istanbul monument back into a mosque, said that Christian images that Muslim worshipers would face during prayers (i.e., toward Mecca) would be hidden at those times and uncovered when Hagia Sophia is open to visitors. He added that mosaics and paintings in other parts of the building would pose no problem. – Artnet 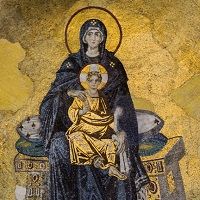