“A sprawling, 44-day anniversary program has been mostly postponed until next year. It has been replaced with a reduced, 30-day schedule, through Aug. 30, of concerts, plays and two (instead of seven) staged operas.” Artistic director Markus Hinterhäuser says “we have measures for cultural institutions — which are 200 percent necessary — that respect the health of the people working and the audience.” And those measures, it turns out, were designed partly by a baritone-otolaryngologist. – The New York Times 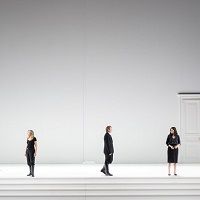