“Mr. Schonfeld, who had been expelled from Harvard Law School for gambling, was nothing if not a risk taker. Early in his career he produced newsreels shown in movie theaters, and by the mid-1970s he was running an agency that provided news programming to independent television stations. In that role he met [Ted] Turner, a brash sailor, sports-team owner and cable TV entrepreneur who was looking to make a bigger name for himself.” – The Washington Post 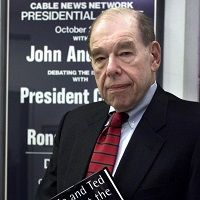