“The removal of a pair of concrete murals by Pablo Picasso was completed Tuesday from a government building in the Norwegian capital of Oslo whose demolition was under way.” (That building, called the Y block, was damaged in the 2011 bombing-and-murder spree by right-wing terrorist Anders Behring Breivik.) “The total cost of the removal of the art pieces — to be preserved and installed elsewhere — and the demolition is estimated at 59 million kroner ($6.4 million).” – Yahoo! (AP) 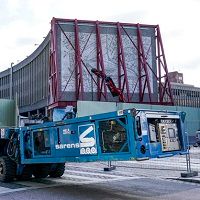