Historically, the purpose of monuments, says Ken Lum of Monument Lab in Philadelphia, “has been to activate or even sustain a certain narrative of memory which people of influence have deemed worthy or important to maintain. They are mnemonic devices.” And, traditionally, they’ve usually been large sculptures of men. (If they were of women, those women were usually fictional or allegorical figures rather than actual people.) But that has changed over the past few decades, with the standard-bearer being Maya Lin’s Vietnam Veterans Memorial. Now that a whole slew of old-style monuments is being removed, Carolina Miranda looks at what might be replacing them. – Los Angeles Times 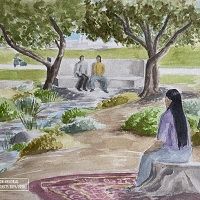