Their names were Sister Föben, Sister Katura, and Sister Hanna, and they were members of the Ephrata Cloister, a radical commune of Pennsylvania Dutch Evangelicals in the mid-1700s. Baritone and musicologist Chris Herbert (of New York Polyphony) has digitized and transcribed the manuscript in which these composers’ hymns (“just devotional, simple music,” he says) were found, rounded up four singers, and recorded the works in the Ephrata Cloister Meetinghouse. – NPR 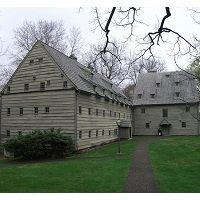