The workers — public-facing staffers who watched over galleries and answered questions about art — had announced plans to unionize with AFSCME in early November over concerns related to wages and working conditions. Days later, they were all laid off via email. The Marciano also announced it would shut down its galleries due to low attendance. A month later, the museum made the closure permanent. – Los Angeles Times 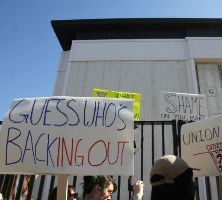