“In both the manifold building blocks of his works and their titles — Ba-O-Ba, Ju-Ju, Palm Saw Tooth Blatt, Bison Bop — Mr. Sonnier came off at times as an irreverent sensualist alongside peers like Bruce Nauman, Eva Hesse, Jackie Winsor and Robert Smithson, who employed some of the same materials.” – The New York Times 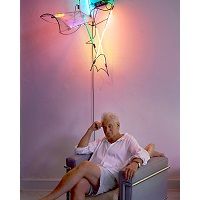