“Scholars in the work of surrealist Frida Kahlo have searched for more than six decades for The Wounded Table, a 1940 oil painting illuminating her pain over the breakup of her marriage to muralist Diego Rivera that hasn’t been seen since an exhibition in Poland. And the historians strongly reject the idea that the mystery of its whereabouts has been solved, as claimed by a Spanish art dealer who says the painting is now sitting in a London warehouse awaiting a buyer willing to spend more than 40 million euros.” – Yahoo! (AP) 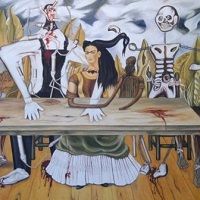