Skeptics see Erdoğan’s decree as a last-ditch call to his nationalist base for support as his political star wanes among Turkey’s youth. Even before his disastrous Covid-19 response threatened to destroy the Turkish economy (queasy about offending his religious supporters, Erdoğan failed, for example, to impose quarantines on pilgrims returning from Mecca), he was facing growing opposition over his crackdown on civil society and the judiciary and his disastrous handling of Turkey’s foreign affairs. – The New Republic 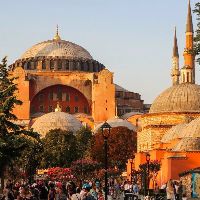