The plan just announced by artistic director Christine Cox is for “a new series launching Sept. 10 celebrating the company’s 15th anniversary with world premieres by 15 choreographers. She sees the season in terms of a subscription-based film festival with nine shorts and six features. The shorts will be dance films presented on a new virtual platform hosted on the company’s website called BalletX Beyond. The features are intended to be performed live in the spring or summer, depending on public health concerns, but they, too, may be turned into films, if necessary.” – The Philadelphia Inquirer 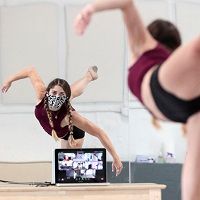