A child star who was once dubbed “the Scottish Shirley Temple,” she “grew up to become one of the most dynamic jazz artists of her generation, writing lyrics and electrifying audiences with her daring, high-speed singing as part of Lambert, Hendricks and Ross.” Later in life, she had a brief movie career and then returned to singing; in between, she led “an often-troubled personal life, which included heroin addiction and a tumultuous relationship with taboo-breaking comedian Lenny Bruce.” – The Washington Post 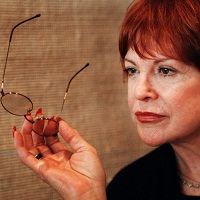