The Wilma in Philadelphia plans to construct and install what it’s calling The Wilma Globe. “It would be built within the current Wilma Theater and would place audience members, individually or by small groups, into two tiers of stalls separated by wooden dividers and facing the stage. With a flexible configuration it could seat as many as 100 people or as few as 35.” – The Philadelphia Inquirer 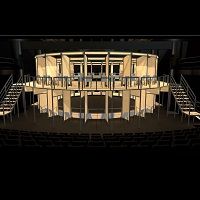