Haruki Murakami famously wrote his first novel in English and then translated it into his mother tongue himself, resulting in a plainspoken, “neutral” (his word) style far removed from standard literary Japanese. Several critics referred to that style as “translationese.” Masatsugu Ono (both a translator and a novelist himself) makes the case that Murakami, Kenzaburo Oe, Yoko Tawada, Minae Mizumura all write in other languages and translate foreign literature into Japanese, and that this is what has made their work so distinctive. – The Paris Review 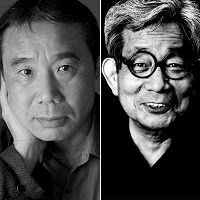