This past Friday night, as the KCPD prepared to confront people demonstrating against police violence in Minneapolis and elsewhere, security guards on duty at the closed museum agreed to police requests to park squad cars there — and the Nelson-Atkins got some harsh criticism online when photos of those police cars hit social media. Museum director Julián Zugazagoitia says that when he found out about this after midnight, he asked the KCPD to vacate: “It is exactly the opposite of what the Nelson stands for, what the museum stands for, what we want to do as work and what we have been doing as work.” – KCUR (Kansas City) 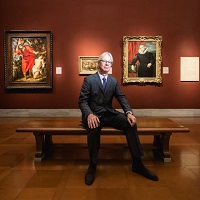