While she did sing some Italian roles (Gilda, Lucia, Rosina) and even a few German ones (the Queen of the Night, Zerbinetta), Mesplé won worldwide acclaim for the French concert and opera repertoire — new works by Francis Poulenc as well as such famous parts as Olympia (The Tales of Hoffman), Leïla (The Pearl Fishers), and, most of all, the title role in Lakmé. – Gramophone 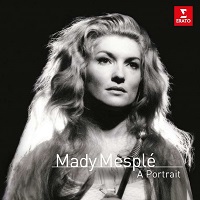