“[The decision is] a surprise legal victory in a fraud case his supporters say was politically motivated and a test of artistic freedom in Russia. Suspended sentences are widely seen as the lightest punishment in Russia’s legal system, which rarely issues not-guilty verdicts. The sentencing was met with applause by the hundreds of supporters gathered outside.” – The Moscow Times 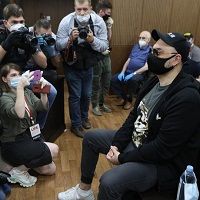