According to the Mayor’s Office of Media and Entertainment, film, TV, theater, music, advertising, publishing, and digital content in New York provide 305,000 jobs, and an annual economic output of $104 billion. What happens when the very things that bring so many people to New York are forced to shut down? When we’re banned from congregating in sanctuaries of art, drama, dance, comedy, literature, and music, where does the culture go? – National Geographic 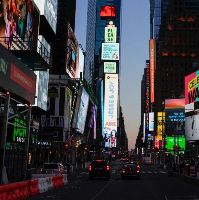