“On Thursday, Culture Secretary Oliver Dowden published the five-stage plan for a ‘phased return’, which will initially let performances take place outdoors, with indoors performances to follow later.” The plan is being widely dismissed as inadequate: one theatre exec called it “as useful a map as a snakes and ladders board,” and the chair of the Writers’ Guild said that “a road map is only any use if you have enough petrol to get you where you need to go.” – BBC 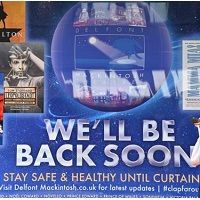