“Mário Frias … is the fifth person to hold the role in the 17 months since president Jair Bolsonaro was elected and, like most of his predecessors, Frias has no political experience. … Last month, [Frias] participated in an anti-fascist protest in São Paulo and said that demonstrators were taking part in ‘organised crimes’ and should be considered terrorists.” – The Art Newspaper 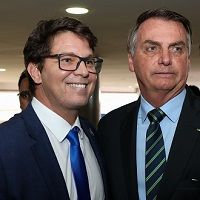