“[He] is most commonly associated with the Light and Space movement, which was pioneered by a group of artists working in California during the 1960s. … Alexander wound up producing understated, sleek objects that seemed at times to reinterpret Minimalism with a less chilly aesthetic. Often, the resin works take on semi-translucent cuboidal shapes, with colors that appear to fade depending on where the viewer stands with respect to the object.” – ARTnews 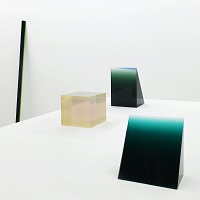