“The July 18 attack on Kyoto Animation, a famed anime studio that produced popular ‘slice of life’ shows and movies,” killed 36 people and was the worst mass murder in Japan in decades. “Officials said that the attacker had shouted ‘Die!’ as he entered the building and then tried to escape, but collapsed on the street outside and was subdued by workers.” – The New York Times 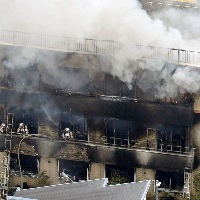