“Most often associated with the Grupo Frente movement of the 1950s and ’60s, Palatnik was among the first Brazilian artists to take up a style called Concretism, which envisioned formalist geometric abstraction as a pure style of art-making that referred to nothing other than itself. … While he was a member of that group, Palatnik produced works that he called ‘Kinechromatic Devices’. … Composed of lights and industrial materials such as metal, fabric, and wood and positioned somewhere between painting and sculpture, these objects seemed to make lush abstractions lurch into motion when activated.” – ARTnews 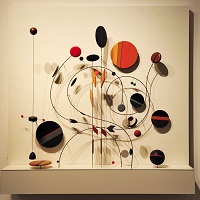