Despite the fact that American pop culture and the ability to speak English are considered very cool in Japan, multinational companies want their employees to know the language, and the Japanese government stresses the importance of learning English and constantly rejiggers the curriculum in the subject (which is required), well under a third of the population there speaks any English at all, with the percentage of people who are fluent in the single digits. An American journalist and translator in Nagoya looks at the structural and cultural reasons for this conundrum. – Foreign Policy 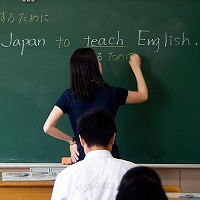