“[He] came from a family of griots, the dynastic West African musicians whose songs carry news and chronicle history. Steeped in those traditions, he electrified the kora, the traditional griot’s harp, and he fused African music with styles and instruments from Western pop. … [His] 1987 single “Yé Ké Yé Ké” was a hit, first in Africa and then across Europe. It became the first African single to sell more than a million copies and has been licensed frequently for commercials and film soundtracks.” – The New York Times 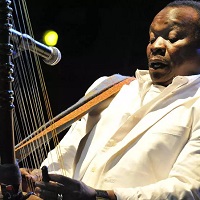